THE winners of the Fine Food Awards 2011, were announced at Nigel's Fantastic Food Show by TV chef Nigel Haworth himself, crowning The Great North Pie Company in Stockport, as the awards’ ‘Supreme Champion’. 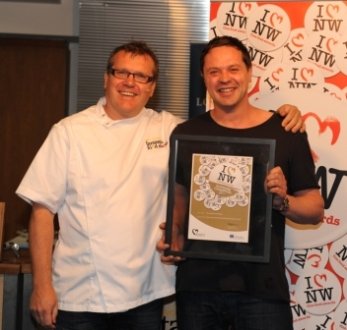 The awards were judged by a select panel of food experts including top chefs, food buyers and food writers, through a series of heats held across the region.

The coveted Food NW Gold Heart Awards, which recognise ‘exceptional’ products, were awarded to 12 fine foods. Some 106 products, which were deemed as ‘excellent’ by the judges, secured a ‘Food NW Heart Award.

The Great North Pie Company, in Bramhall, Stockport, was named as the Fine Food Awards ‘Supreme Champion’ after scooping two gold awards for its Steak and Oxtail Pie made with Old Tom Ale and homemade bramble jelly, and its Cheese and Onion Pie, made with Butler’s Tasty Lancashire Cheese, caramelised white onion and pine nuts. They also won a Food NW Heart Award for their Hot ‘Pork’ Pie.

Owner, Neil Broomfield, started the business just three years ago, after he saw a gap in the market for quality, traditional pies. Having worked in some of the region’s top restaurants, he decided to go it alone and started making pies in his own kitchen to sell at a local farmer’s market. Since then the business has gone from strength to strength, and he is currently looking to move operations from his current unit into new premises. 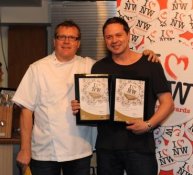 Neil says: “It’s amazing to win these awards.  I put a lot of work and thought into the pies, trying to get every one right. You always need feedback and I’m so glad that people like what we do. With some of the top chefs in the Northwest judging, it’s nice to know I’m going along the right lines. I’ve always wanted to make something that is special and of real quality, and support as many local producers as I can. I just hope this is the start of something and I can continue to improve. I just hope people keep enjoying what I am trying to create. I want to make some of the best pies in the country, using the best ingredients from the North.”

Food NW Gold Heart winners include Tattenhall-based Sugar Daddy Patisserie for its Pear and Frangipane Tart; Alison’s Homemade in Sandbach for its Stem Ginger Biscuits; H Clewlow Butchers in Nantwich for its Pork Pie with Caramelised Onion Chutney; A Picton & Sons Highfield Farm Shop in Warrington for its Dried Cured Bacon and Fantasy Cupcakes in Rawtenstall for its Vegan Mud Pie Cupcake.