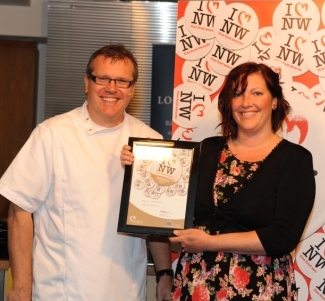 What started out as a childhood hobby for former NHS professional, Melinda Foster, is now an award-winning business based on her passion for traditional British baking and the use of natural ingredients.

In 2008 Melinda, who had always enjoyed baking with her Grandma and Mum, started making cakes for family and friends. As the orders began rolling in, she decided to pursue her dream and made her full time professional role part time to concentrate on the business. Eventually in 2009, as the company demanded her full time attention, Fantasy Cupcakes opened its first outlet in Rawtenstall Market.

Just a year later she swapped her home kitchen for bakery premises at The Old Chapel in Rawtenstall and has never looked back.

Melinda creates bespoke cupcakes for all occasions, including weddings, christenings, birthdays, children’s parties, anniversaries and afternoon tea parties.  Borne out of Melinda’s love of traditional British baking, maintaining traditional methods and the use of traditional ingredients, Fantasy Cupcakes does not use preservatives and uses only natural flavourings and top quality natural ingredients, which are locally sourced wherever possible.

Every cupcake is baked fresh for customers prior to collection or delivery. Melinda uses season fruits where possible and always uses eggs from hens, which range freely over the Rossendale hills.

She created the winning Vegan Mud Pie Cupcake after noticing that the vegan food at family gatherings was often more appealing and tastier than the other food.

While not a vegan herself, always keen on a challenge, she decided to set herself the task of making cupcakes that were free from animal products, but also tastier than regular cupcakes containing butter, milk and eggs, and which could be enjoyed by non-vegans out of preference rather than dietary need.

She adapted a family recipe for a larger cake, along with a modified filling for a chocolate torte, added a dusting of high quality cocoa and a small handmade flower and the Vegan Mud Pie Cupcake was born.

Although still a one-woman business, Fantasy Cupcakes is planning to develop and grow a wholesale and retail side to the business and is currently seeking quality outlets to stock its cupcakes, while still retaining its strong ethos of producing a high quality fresh product, which has the taste of a home-baked cake.

Melinda said: “Winning a Gold Award is a phenomenal achievement for Fantasy Cupcakes as we are a relatively new local and small business. Despite there being many cheaper and lower quality products in the market place, we have always remained true to our ethos of using quality local ingredients and traditional baking methods – hand baking our cupcakes in small batches. This award has rewarded this ethos and affirmed our belief in our product.

“The Vegan Mud Pie Cupcake is a winner because it is a cake which people who can’t or don’t want to eat dairy can enjoy, but can equally be enjoyed by those who just love cupcakes! It’s an innovative product, which can’t be bought on the high street and which demonstrates that those with special dietary requirements do not have to compromise on taste and quality.”

The company creates cupcakes for those with special dietary requirements such as dairy free and gluten free and gift boxes are a speciality, especially those featuring personalised cupcakes. Corporate clients have included Nelsons of Wimbledon (Bach Flower Remedies) and Leeds United Football Club.