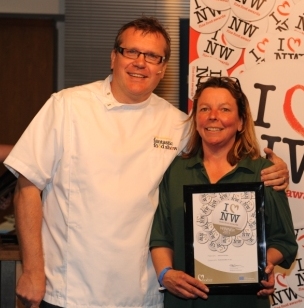 The Bowland Beer Company Ltd started life in 2003 when founder, Richard Baker finished a contract working in the Falkland Islands and decided to follow his dream to set up a microbrewery producing the finest artisan beers.

While he was developing the idea, by chance, his friend had just opened a farm shop in Bashall and was looking for tenants...the rest is history. New to the North West, having lived in every other area of the country while has father was in the army, he was keen to make a success of his new venture. Now, he has grown a successful, award-winning business and has made Lancashire his home.

With an initial output of 650 pints per week, which has grown to 14,000 pints per week, the business produces hand-crafted real ales using the finest Maris Otter malted barley and full-flower hops and employs seven people, in what was once the milking parlour of Bashall Town Farm. Although most of the output goes into casks for pubs and restaurants throughout the North West, the company’s sales of bottles and mini-casks now account for nearly 25 per cent of trade.

The company’s winning ‘Admiral of the Blues’ has been developed over the last couple of years out of a desire to produce a premium cask ale that ‘’would set the world alight’. It has grown from lessons learned while Richard was producing Artisan Gold the company’s champagne beer. First brewed for the International Beer festival at Colne, Richard decided to name the beer in honour of the local pub and namesake, Admiral Rodney, head of the ‘blue squadron’. After ‘obsessing’ over the balance of hops, Richard found it was very popular and worked hard on the recipe.

With a background in manufacturing and engineering always helpful, he developed a new piece of equipment called ‘the hopulator’ which injects a burst of hops as part of the process, and which he says, helped bring the beer into a league of its own.

He also invested in a bottling machine, which allows him to produce smaller batches, using filtration and carbonation methods not possible on larger equipment. The beer has now become a huge success story, winning the Food NW Gold Heart Award and Overall Champion Beer for the North of England at the Society of Independent Brewers competition and the National Best Bitter award earlier this year.

Artisan Gold, the company’s champagne beer, which won at last year’s Fine Food Awards is now selling commercially and has received rave reviews from beer specialists across the UK. It is produced using methods found in the finest champagne house of France and is sold in 750ml champagne bottles with corks, muzzles and foils. The Bowland Beer Company is one of only perhaps ten breweries around the world producing beer in this way.

The Bowland Brewery is situated close to the exact geographical centre of the United Kingdom in the Forest of Bowland. Its cask ales are available in 4.5 gallons, 9 gallons and 18 gallon casks throughout the North West of England and further afield through a select number of wholesalers. Its beers are also available in 500ml bottles and 5 litre mini-casks through its on-site visitor centre and shop and also through specialist retailers.

Richard says: “I am delighted to be honoured in the Fine Food Awards which offer true competition as they are judged purely on quality and taste. It makes all the hours of work worthwhile. I want our beers to be so good that they don’t need selling – people will just keep coming back for more and the Fine Food Awards are great for spreading the word about what we are doing.”

“After eight years in Lancashire I consider myself very much a local and I am delighted that local people consider The Bowland Beer Company’s beers their own, and that we have become part of the local heritage.”