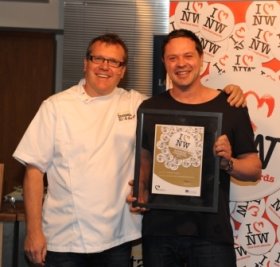 The Great North Pie Company was set up in 2008 by Neil Broomfield to make quality pies made with quality local ingredients.

Having worked in some of the region’s top restaurants, including Heathcotes in Manchester and alongside Jeff Baker in York, Neil started the company making pies in his own kitchen to sell at a local farmer’s market. He sold out at his first market in just an hour and since then the business has gone from strength to strength and he is looking for new premises to move operations from his current unit where he still bakes with a domestic oven.

The pies are all made by hand and the company ethos is based on quality, from the ingredients to the traditional way in which they are individually handcrafted. The company’s menu changes with the seasons and using only the best ingredients the product range changes every month. The Great North Pie Company's pies are sold at farmers’ markets across Cheshire and the North West and to local catering outlets.

Neil says: “It’s amazing to win these awards. I put a lot of work and thought into the pies, trying to get every one right. You always need feedback and I’m so glad that people like what we do. With some of the top chefs in the North West judging, it’s nice to know I’m going along the right lines. I’ve always wanted to make something that is special and of real quality, and support as many local producers as I can. I just hope this is the start of something and I can continue to improve. I just hope people keep enjoying what I am trying to create. I want to make some of the best pies in the country, using the best ingredients from the North.”

The winning Cheese & Onion pie has always been Neil’s favourite flavour since childhood and is made with Butlers Tasty Lancashire Cheese, Caramelised White Onion and Pine Nuts. Neil says the cheese is the star and was recommended to him by the “cheese detective” Peter Papprill. He added idea pine nuts after a meal in Bordeaux, he had eaten an onion pannacotta with pine nuts and the two ingredients worked so well, it seemed right to add this to the pie to bring extra flavour and texture.

The Steak & Oxtail pie, which won a Food NW Gold Heart, is made with Robinsons Old Tom Ale and homemade bramble jelly from fruits he forages for. He uses Cheshire beef from his butcher H.G Beards in Bramhall. The Oxtail adds an intense depth of flavour and the bramble jelly balances out the bitterness of the ale.

The company has won a Fine Food Award for the last three years, with Neil winning an award in 2010 for his ‘Potted Shrimp and Butter Pie’ (Lancashire Pissaladière). He has also just won the British Pie Awards in Melton Mowbray, for best Fish Pie for his smoked eel pie with horseradish, lemon and parsley and also best Cheese Pie using Heler’s cheese with leeks and apple. The company also scooped a three-star gold award in The Great Taste Awards 2009 for its ‘Meat and Potato Pie’ with madeira and white truffle oil.