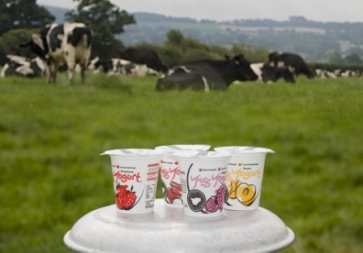 Giles Leverton Dairy Buyer said ‘Stocking Yess Yogurts was a natural synergy in our strive to support local producers in our stores, and Cheshire was one of the few area’s where we did not have a regional offering. We look forward to giving our customers a great tasting range of low fat local yogurts”

Daisy Fresh Foods was set up in 2007 by Martin Farrell and Wayne Wheildon.  The combination of over 40 years yogurt making experience teamed together with a real passion for producing a quality Cheshire product resulted in Yess yogurts.  Wayne comments “our main ingredient is our milk.  We put a lot of time into finding the right farmer to work with to ensure that our milk is of the highest quality and the welfare of the cows are paramount.  We source all our milk from the international award winning Tiresford herd based less than 4 miles from our production site in Tattenhall which ensures a real fresh taste. The name Yess yogurts derived from the fact that it is so natural, and there are no ‘no no’s’ in a Yess yogurt!  We are really excited to have the opportunity to work with Morrisons and hope that their customers will enjoy our product and support our future”

Morrisons are not the only fans of the yogurt. Top chef Leigh Myers previous head chef at the Michelin star Londgridge restaurant and North West Young Chef of the year uses it in all his kitchens and on his breakfast tables.  Now Executive Chef for The Grosvenor Hotel Pullford, The Pheasant Inn and the newly opened Bears Paw in Warmingham quotes ‘Yess yogurts are a fantastic product, surprisingly creamy, full of fruit and very versatile.   It is great to find a Cheshire based yogurt company to build on our locally sourced menu.’